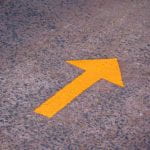 How can I evaluate an interpersonal conversation in a way that is not super stressful for my students? How can I listen to them just “talk”?  When I first started I used to have them do the conversation in front of me. They had to talk and I sat there with my rubrics and evaluated.  They were nervous to speak in front of me and worrying about how well they are doing. I was trying not to make them nervous, to just listen and not write too much (they equated writing with mistakes) and then had a split second to record impressions before the next set. So then I moved on to recording. “Just go out and record you and your partner speaking.” What a great idea! Despite the issues of quality, and sometimes the ‘obvious clicks’ of a recording pausing I thought this was better. Then I’d spend a long time listening to the audio files…But I still didn’t like it – too stilted and  too ‘staged’. They found it nerve-wracking saying they felt a pressure to perform and be right on a recording or they’d want to record it again. A great colleague Connie Santos, who is an awesome department collaborator, had been experimenting with a new style of oral…and I was willing to test her ideas out too…The new ‘orals’ began.

Before the Oral Discussion – What They Are Doing

Generally I have two partial periods for them to prep before the orals. They are brainstorming ideas for themselves to use as a basis for the orals. Just like before they are chatting with partners as they prepare. They are speaking, and listening and practicing supporting. They are reviewing how to say when they don’t understand and how to assist someone who isn’t understanding them. They are using supports as they need to. They are asking questions of me and trying to say what they want to say.  They are exploring ways to address the topic(s) to be discussed and what fully meet, or meet, would sound like (we do have a rubric for this to guide them).

Before the Oral Discussion – What I Am Doing

I am working with them to give them any supports that they need. I am taking some time to ask them to target specific structures during a preparation session. I am listening and giving some feedback. I am actually walking around with a clipboard to get them used to what I will have during the oral. I am asking them to not understand something on purpose to practice both asking for and providing assistance. I am working with them in any way they ask me to from “how would I say…?” to “is there another way I can…?” to “am I saying …. correctly?”.  I am also modelling what I will be doing during their oral – walking around, looking like I am taking notes, stopping to listen…and reinforcing that what I am/will be writing is what I am hearing not writing down a list of ‘mistakes’.

During the Oral Discussions – What They Are Doing

They are speaking with a partner for a set period of time. If they need supports they have them although they know they can’t fully meet expectations if they do. They are listening, and speaking, and clarifying and questioning. They are talking the entire time – addressing the topic and going beyond when they have other things to discuss. They are telling their partner when they don’t understand and helping out when they are asked to. At the end of the alloted time (my Grade 11’s first oral was 11min per partner) they are thanking their partner and moving on to another. They are speaking with 8-9 people over the almost 2 classes this will require.

During the Oral Discussions – What I Am Doing 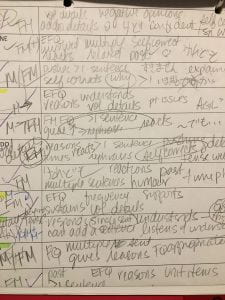 I am walking around with a clipboard and stopping to listen. Often who I am looking at is not who I am listening to. (I’m getting good at looking one way but listening to another to try to reduce their anxiety!) I am making notes on what I hear. “At grade level” “clarifies” “unit structures” “adding details” “says when doesn’t understand” “effective follow ups” and more in a shorthand that allows me to make notes more quickly “agl”  “clfy”, “Unit” “dets” “asks help” “eff f-up” etc. If there are serious issues I am making a brief note too. I am making multiple passes listening to kids more than 1 time. I am leaning in when I need to to hear the quiet ones. I am constantly checking that I have ‘enough’ and when I feel I have enough for a student checking them off and listening to those kids I need more on. I am moving, listening, moving, recording over and over.

After the Oral Discussions – What They Are Doing 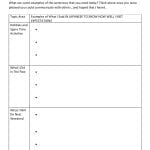 They are reflecting on the oral. They are assessing how they feel about how well they have met expectations. They are considering my question “What did you hope that I heard” and are offering up evidence of the kinds of things they said on the topic. They aren’t using notes or dictionaries to do this so it’s coming from what they actually said. And I’m not worrying as much about spelling/correct forms as I am looking at what they said. They are providing evidence of how they participated. On my last Grade 11 orals I gave them room to provide 4-5 sentences on the three topics areas they touched on.

After the Oral Discussions – What I Am Doing

I’m also reading their evidence to see what they highlighted – and seeing if generally what they report they said reflects what I heard. I’m looking at my notes generated when I listened to them. I am preparing my feedback for them – not on everything but on key items. My response sheet (feedback sheet teacher) is divided into “Things That Were Noticed..”  – the positive things I say/heard them doing and “For Next Time” – advice on how to step up and sometimes corrections. I write out my notes for each…and eventually clip it to their response sheet.

It took a bit to get comfortable with this  style – and every time I do one I get better at it. But I like this…I like what I see and, most importantly, I like what I hear…