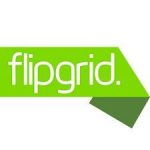 Entranced by all the tweets, and with the promise of #langchat super-colleague (and Flipgridder supreme) Wendy Farabaugh‘s support, I entered the Flipgrid ‘grid’ game this week. It was an interesting learning time for me – with much hand-holding (via Twitter’s DM) by Wendy…Here’s how I did it, my reaction and frustration, and my suggestions (golly this is rather forward for a first-time user) for the Flipgrid developers…

Free Basic Grid  – No I don’t have a ‘paid’ subscription yet (I took advantage of Flipgrid’s ‘one grid free’ offer)…but I think that I might because I can see myself using this repeatedly and I’d like to have a grid for each grade level. I know that there are other ‘paid’ bonuses but right now I haven’t explored them beyond apparently going ‘paid’ so that students can record for more than 90 seconds and being able to upload rubrics to use (will they let me use descriptors and not numbers? I’ll find out I guess!)

No Student Account Creation Required – Canadian privacy laws are tough – and for many programs that ‘hold’ data – especially not having that data in Canada – I have to seek parent permission to use it. But Flipgrid requires no login – no registration – and this was a big ‘plus’ for me. I could try it without asking kids to ‘create’ an account and all the issues – at least here in Canada – that that entails.

Moderated Grid with  NO PUBLIC videos! – This was my biggest worry about using Flipgrid. Although some teachers seemed to love that ‘everybody in the class can see everyone’s video’  I have noticed that many of my students are reluctant to be ‘seen’ on video. Heck – I hate seeing myself on video so why should a student feel any differently? I am also really uncomfortable with the focus these days by kids on ‘quest for likes’ and ‘views’ and ‘clicks’ – and the popularity contest it implies. I wondered how to deal with that. So I promised my students that I would moderate the responses so that no one else would see them. I even showed them the ‘moderated’ word on the recording button so they would know. My biggest fear was that I would actually accidentally release their videos to be viewed by others. This seemed rather likely when I received a message that I had a new video and it needed to be ‘activated’. Wendy’s calm reassurance that I didn’t need to activate helped in this moment of ‘what should I do?’  Suggestion for Flipgrid  – add a ‘caveat’ here that if you are not making videos public you don’t need to ‘activate’ the video.  It’s a confusing moment when you have selected ‘moderated’ to be told to ‘activate’ without knowing what that means! Will I ever have public videos? I can see me doing this with my Yr 4’s – when I have had them, talked to them & developed the supportive atmosphere that I think this would need. Until then – moderated only. 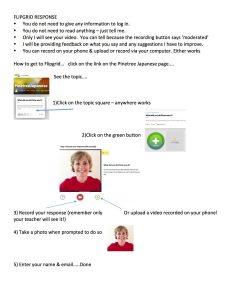 visuals too. I couldn’t find this easily on the site or the web.  Suggestion for Flipgrid – add a basic step by step one page text/visual instruction sheet for the rookie teacher (Flubaroo, for example has a great walk-through to do this) or that a kid can have at home – or a teacher can upload to a site. Lacking one I could crib from another source I created my own…(see right – and yes I ‘m going to have to add a ‘recorded on your phone?’ part.)

This is Going To Be Easy – Or So I Thought – It all looked so easy to me when I tested it (and really it is NOT difficult to use). I recorded a video and uploaded via my computer but noticed they could ‘upload’ one too. I thought this was for any recorded video but I was wrong which led to…. Issue One – I didn’t see that if students recorded on their phone they had to upload via the APP. Learned that one the hard way.  And then…Issue Two – How do they get to it –  is it the Link to the topic or the Code for the grid or what do you give them? I was confused.  Thank goodness #langchat amie Natalia DeLaat read my tweet & replied. I learned that the code worked best with the free app…but to make it easy I linked my topic to my website – they just had to click on the link to find the topic to respond to. As for how they recorded their response – curiously (or not?) – 95% of my kids used their computers not their mobiles for this.  Suggestion for Flipgrid – tell me which to use the code or the link…it’s confusing to see the ‘code’ for grid and the ‘link’ for the topic and not know which to give kids. Could you add a quick link “What is this” at least near the code so I know what to do?

Give A Basic Prompt – I wanted to test this out with something easy for kids to do. So as a review I asked students to tell me two things that they did on the weekend and how it went. The 90 seconds allowed under the Free Flipgrid was fine for this. I liked hearing from them and that most (even if they practiced) just ‘told’ me what they did. I liked seeing them too…it was great.

Feedback…and the BIG (soon to be solved) Asian Font problem – I was so gung-ho for this part. Until….the ‘practice’ (and I suggest the first time you use this you test it out for  yourself  – the whole process recording to sending/receiving a response). I recorded my own response and gave myself feedback. But…even though Flipgrid allowed me to type in suggestions in my TL – Japanese, when I received the feedback email the Japanese didn’t show up. I must offer my Thank You Flipgrid message here. They were very fast when contacted about this and assured me they were ‘all over it’ and should have a ‘fix’ for this in 2-3 business days. (As I write this I await…but I don’t doubt that they will – update as of Sept 27…it appears to be ‘Japanese language’ friendly now!)  Once I got rolling on the feedback it was super easy – and I am considering the paid because I’d like to give rubric based feedback too. Suggestion for Flipgrid – you have ‘recording’ capacity built into your program. Why not let me ‘record’ audio feedback (not video just audio) so the student can hear my response (like they do when I use Kaizena)?

A Quick Check on A Concept – As a teacher in Canada without access to Google Voice (yes – apparently we don’t rate that north of the border), Flipgrid offers me the ability to quickly check if a student has grasped a concept and – this is great – see them/hear them as they do it too. I am heartened that they did not hold up a paper and just read. I believe that with longer time, and more in-depth topic starters, that they will be less concerned with an ‘answer’ and responding more naturally & that’s what I want to hear. And it allows for timely feedback too.

Cautionary Technology Note – It’s 2017 and I naively assumed all kids would have (a) access to a computer with a camera & microphone or (b) a smart phone. They don’t. And I worry that I caused some embarrassment to those who didn’t want to tell me that they didn’t. My solution going forward – I will give a ‘range of days’ to complete the assignment. And I will offer up in-school options for them. I will try to do a deal with both our IT department for access to ‘recording/camera ready’ computers and a quiet place to do this. I am also going to see if my old iMacs (that I use in my classroom mainly for videos for stations days) can be used. That way all kids can access this. Another note – I had one student who tried and tried to upload. We tried the web-based Flipgrid. We tried the app. Didn’t work for her (don’t ask why) – so she just sent me the audio! Bottom line – be sensitive & adaptable!

Will I use it again? Yes. Do I think it is a useful tool for quick checks. Yes – for what I want to use it for it does.  Yes ….I believe I have the fever.