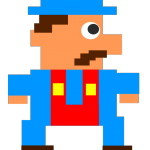 I will totally admit – as I did in my last post – that I never was on the ACTFL ‘proficiency’ bandwagon in class. Not that I didn’t get ‘proficiency’ but I didn’t get why I had to focus on the levels with my students. Nope, didn’t think it was necessary in my classroom. Every time it came up on #langchat as a discussion item I listened…but I didn’t buy in to using them with students. Why? Well I didn’t think it was that motivating. Really – I expected my students to care, to want to get to ‘Novice High’? I thought they’d react with all the enthusiasm of a request for them to complete 100 questions from a workbook. I mean – “Whoo hoo I’m Novice High!”. Couldn’t see it.

I was wrong. I get it…I really do – after time spent at #tellcollab in Seattle, listening to Thomas Sauer and all the great teachers who were sharing, it suddenly clicked. Specifically, when Alyssa Villarreal said “Kids don’t want easy – they aren’t afraid of ‘hard’…just look at video games…” the proverbial penny dropped.

What do I mean by this? Consider that our kids play, and replay a game trying to get to the next ‘level’ for a new challenge, a new reward or a new option to play. They will play and replay a level trying to get enough points to move up. They will play solo and against each other. They will (as I do with Angry Birds!) seek out cheats on YouTube to help them accomplish tasks they can’t seem to get. And they will do it over and over again until they get there.

What I have been doing in class has been like asking students to play a video game without the reward of being able to ‘achieve’ those levels. You see, I’ve been big on meeting the expectations in my class. Students know, and can repeat ad nauseam, what it means to be meeting or fully meeting expectations in class. They know that ‘meeting’ means you are delivering the current unit items well and that ‘fully meeting’ means you are not only able to use the current items well but you are bringing in past learning effectively too. They can pre-mark work and point out where and how they do so. But that’s it. I see it now – I’ve been asking them to play the video game over and over but I have failed to validate this but giving them a ‘new level’ to achieve. I’ve been asking them to improve but not ‘rewarding them’ for achieving and giving them the next ‘level’ to shoot for.

You know if you asked me to do the same thing over and over, but didn’t give me the satisfaction of achieving something beyond “you did that level well” I’d give up. If you didn’t clearly lay out not only where I was in the ‘game’ but what I would have to do to get to the next level (and provide tips/a path – okay the ‘cheats’ to do so), at some point I would ask myself why I was doing this? At some point I would give up trying to improve. At some point I’d stagnate in my learning.

So thank you …thanks to Alyssa for that ‘nugget’ from her workshop, thanks to all the #langchat proficiency promoters who have shared ‘how they share’ with their classes. Thanks also to my fellow ‘rebel’ colleague Connie who, along with me, is starting to lead the ‘proficiency’ charge in my department because we know it is the right way to go.

I get it…going to use them with my students…looking forward to seeing them more ‘in the game’….