I like to use songs in class and one of my favourite activities is the ‘listen and organize the lyrics’ activity. You probably do the same kind of thing; chop up the lyrics into strips and have kids put them in order as they hear the song. It’s one of many ways I use music...and and great fun. And finally I realized that these activities are great for any time I ask them to listen… 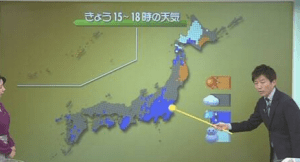 My challenge was around the idea of weather. The students had already done a reading about seasons in Japan which included some basic weather terms. But I wanted to challenge this group so I went to the Japanese national broadcaster NHK. Every day they post their weather forecast in video on their site. I used a screencapture program (many exist like Snagit) to get the broadcast. Then I listened for key vocabulary used throughout the broadcast. I put the words into Quizlet and used their ‘print flashcard’ option to create my key vocabulary flashcards. (I can’t say enough about the ease of using Quizlet to create ‘sets’ of words, and even images, into card format.)

Kids initially found and matched the vocabulary that they knew. Then there was some great ‘guessing’ using previous knowledge (and some hints on the board) for the rest. I came to check for each group as they indicated completion. They could also consult a list, included in the flashcard package, helped them at the end to ensure that they were correct. They reviewed all the cards a couple of times (see English say in TL – see the TL and say in English) and then put the English portion away and spread out the TL cards in front of them. Their task would be to listen to the broadcast and put the TL vocab words in the order that they heard the word.

Then I began to play the broadcast – at real-time speed. I played the first minute several times and as they heard a word they grabbed it and began to organize. I probably played it about 5-6 times…and we ran out of time in the period. The next day they came in and reviewed the outstanding cards…and we listened 3-4 times. The majority of kids had the majority of the weather forecast in order. We then went over the order the words appeared and they listened one final time – putting their finger on the word as they heard it. At the end I asked if they could each find 4 or 5 key words that they might want to use again and they said “we’d like them all!” My students typically work in pairs and they said, after this activity, that this was a great partner thing to do.

I’d never considered using the idea from a song activity for an authentic resource video. Why hadn’t I? Now I’m casting around for other ways to use my various song activities for other ways I ask them to interact with audio in class.