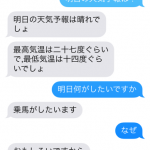 Right off the top – this idea was inspired by a post from Bryan Kandel. If focussed on using a fake text message, sent to him, from a celebrity. Great idea I thought – and it would be great for my “want/want to/don’t want” section of my current unit. Here’s the fun…and how I extended it.

The Text Story for the Hook – Class started, like Bryan’s, with a story. A class character had texted me asking what I wanted to do the next day. He was whining about all the work he had that he didn’t want to do – and how he really just wanted to go play soccer, watch movies and eat sushi. Wham – students are already on board and can easily tell me what they want and don’t want to do. The character’s complaining also made it clear what to do with certain types of verbs – and students easily picked up on this.

During Class – We followed up on the dialogue and students guessed about what their partners, and other people wanted to do, or not do, on the upcoming long weekend (Victoria Day in Canada). Then they would run over to a person they had guessed about and ask them. Lots of moving around and energy in using the language.

Extending the Activity – Do they know how to use it? What would be more natural  than using the structures in their own text conversation? Students were asked to demonstrate their comfort with wanting/wanting to do in Japanese. The options for them were

They then sent it to me by email – it was easy for me to print it off (my choice) and ask them to rework any points of difficulty. Next time I will drop the conversation files  into Google Docs and mark them online using the same ‘colour’ system that I use if I mark ‘paper’.

What fun – about 1/2 my students opted for the peer-peer texting which was great to see – and hopefully there will be more messaging in the Target Language to come!

Thanks for sharing Bryan – it’s now a great tool in my teaching toolkit!