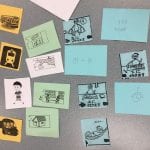 A very detailed story waiting to be told!

Okay I needed an activity. I wanted to provide choice but reinforce key structures. Often if we have students ‘use’ something we are worried that it is being done correctly. How could I encourage creativity but ensure the structures were properly in use? I had seen lots on Twitter about the idea of ‘word sneak’ as a vocabulary game (a post by Catlin Tucker outlines the idea). But I didn’t just want ‘words’ – so ‘Phrase Sneak’ was born…here’s how it worked…

First – I set out the key phrases/vocabulary  they needed in the story. I picked 8 and asked each pair what these would be in the TL. I gave them a small notecard to write them down. Then we reviewed as a class. I also use a lot of visuals in class and envelopes with some of those visuals and blank cards were in their baskets on their tables. You could do this just with blank cards. (I like the idea of visuals as keys to remember what to say.)

Then the instructions. They were given 30 minutes to construct a story (not written down – to be orally told) using a minimum of 6 of the 8 key structure items. And they had to include 3 that I designated as key (they’re the ones with the dots beside them in the picture). I recommended visuals for the key parts – and most used ones we had already (and supplemented with hand-drawn ones).  They were reminded that both partners had to participate in telling the story – that one partner could not do all of the speaking. That was the extent of the instructions. (Note: my colleague whose kids did quick sketches for every picture took much longer to prepare and will tell their tales in the next class).

Just before we set out to share each team got a post-it note. They were instructed that as they listened to a story, and heard the group use the key phrases in telling it, they were to record (a check mark) that they heard it..(They wrote the initials of the group that they were listening to and just put check marks as they heard). My peer tutor also suggested that, when students heard the required phrases, they could indicate that with a ‘star’ instead of a check – I like that extra level of listening. 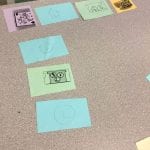 A story waiting to be told!

Then they set out to tell. After each pair recounted their story they stood up and looked for another group that was done. Then they told it again. And again. Most groups retold the story at least 3 times. You could always do the retell the next day (and allow followup questions from the listeners if you wish. That would be a great extension).

It was a different way to reinforce structures, be creative and have some fun! I’ll do it again!

Please prove that you are not a robot.

Powered by WordPress | Hosted by Edublogs | Protected by CloudFlare